Two healthy dancers and two disabled dancers. Gentle touches, sharp blows and falls. Where is the border that we sometimes call "convention"? What is permitted? What is forbidden? What is kept silent?

In the dance performance SIMULANTE BANDE choreographer duo Veronika Knytlová and Tereza Ondrová (VerTeDance) examine the novel possibilities of expression through movement of a healthy and a physically disabled person, the relativity of the term "disability" and the fragile cosmos of interpersonal relations. Non-dancers Alena Jančíková and Zuzana Pitterová present their often invisible limits in unbelievable performances in which they are "assisted" by professional dancers Magdalena Čaprdová and Petr Opavský. Original music by DVA.

“First of all we wanted to create a beautiful performance,” said Knytlová and Ondrová. “We examined the female body, its beauty and appeal, its dimensions and individual limits. Limited motion became for us an inspiration and driving force, with the dancer’s often unseen limitations recast into unbelievable performances.”

VerTeDance was founded in 2004. The group consists of dancers and choreographers Veronika Knytlová and Tereza Ondrová and light designer Pavel Kotlík. VerTeDance have together created the projects:Průzor hrdlem (2002), Kruh II (2004), Tichomluva – Neočekávaný chod(2005), The Brave (2006), Beneath the Silence (2005) in cooperation with CobosMikaCompany, the choreography Třiačtyřicet slunce západů(2007), the site-specific project Tour du Café au lait (2007), the dance performance Jaja a Papus (2009), the choreography Dance of Canis Lupus (2009) in cooperation with Belgian choreographer Thomas Steyaert, the production of Případy doktora Toureta directed by Anna Polívkova (2009), the performance of Emigrantes (2010), Transforma (2010), Found and Lost (2011) and Kolik váží vaše touha? (2011). For their choreography Tichomluva – Neočekávaný chod they won the prestigious Sazka Award for discovery in dance in 2005. Tereza Ondrová was named the Female Dancer of the Year in 2010. The group presents its performances regularly in Czech regional cities as well as abroad: in Slovakia, German, Belgium, Russia, Romania, Austria, Poland, Hungary, Sweden, Ukraine and others.

The piece explores various situations in everyday human life, the problems that healthy and disabled people face, and while everything is treated with a certain humour and exaggeration, its content is nevertheless hard-hitting, precisely aimed and without a drop of cheap sentiment.
The result is a very unique, profound and intelligent piece, which entirely captivates the audience, not only in terms of its content, but aesthetically as well.
Johana Mücková, 8.6.2012, ct24.cz

The VerTeDance contemporary dance company have created a daring piece at Archa called Simulante Bande. Choreographers Veronika Kotlíková and Tereza Ondrová continue their exploration of the abilities and limits of the female body. This unique quartet of performers is made up of professionals Helena Arenbergová and Petr Opavský and two disabled amateurs, Zuzana Pitterová and Alena Jančíková.
Sad, but never sentimental humour, disparages the false compassion of the healthy and the tendency to usurp the others. A must see!
Vladimír Just, 9.6.2012, Lidové noviny

Kknytlová and Ondrová have by means of dance and choreography touched on a whole range of taboos which usually paint over and simplify the way in which the healthy and the disabled perceive each other’s worlds. They have done this sensitively, tastefully and gently; but when they make an incision, it really hurts.
In terms of form the choreographers have succeeded in penetrating tight, but beautifully poetic and blurry contours. The dreamy canvas has a lot to do with the music of Dva, mix various sounds into their largely improvised (non)melodies, including crackling noises that make one think of old records. The performance thus has a discreet nostalgic imprint and feel.
Jana Návratová, 5. 5. 2012, Taneční zóna 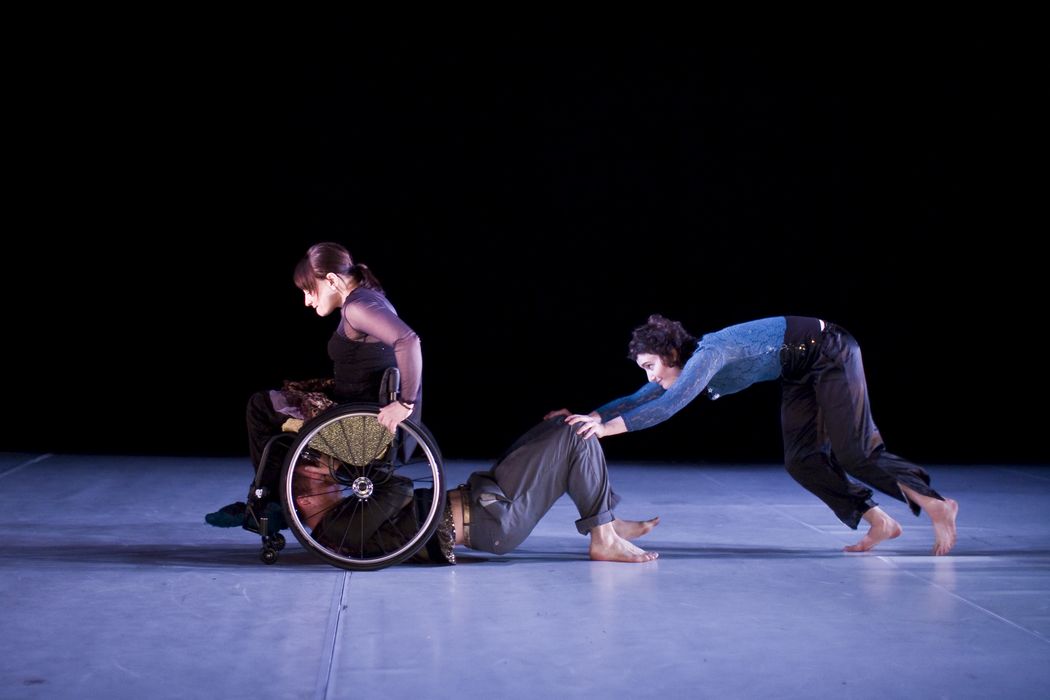 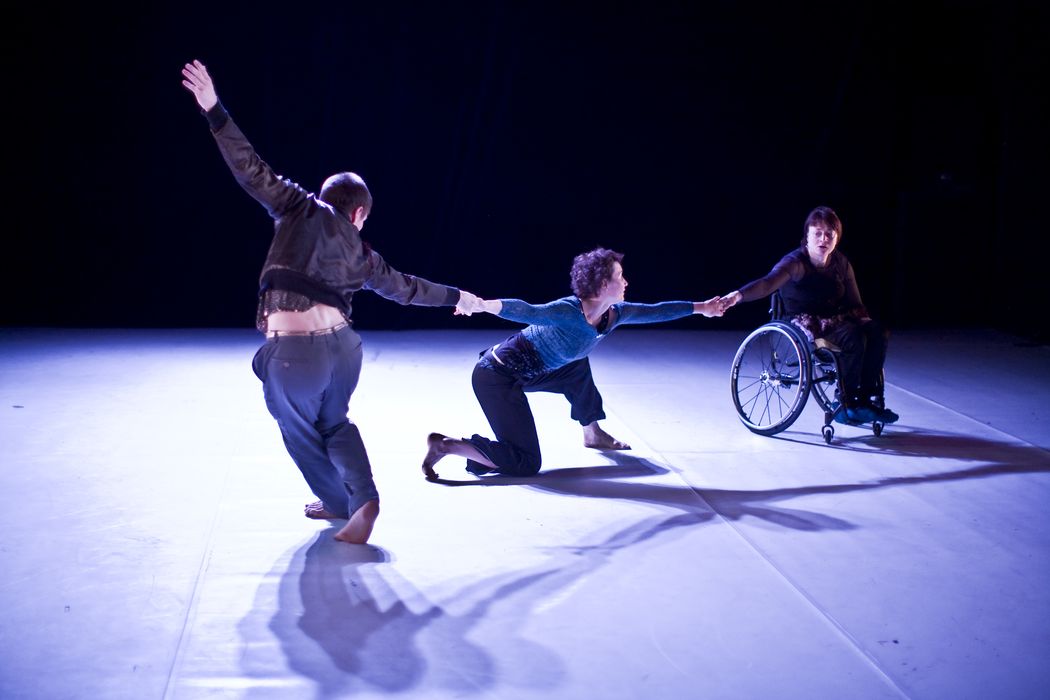 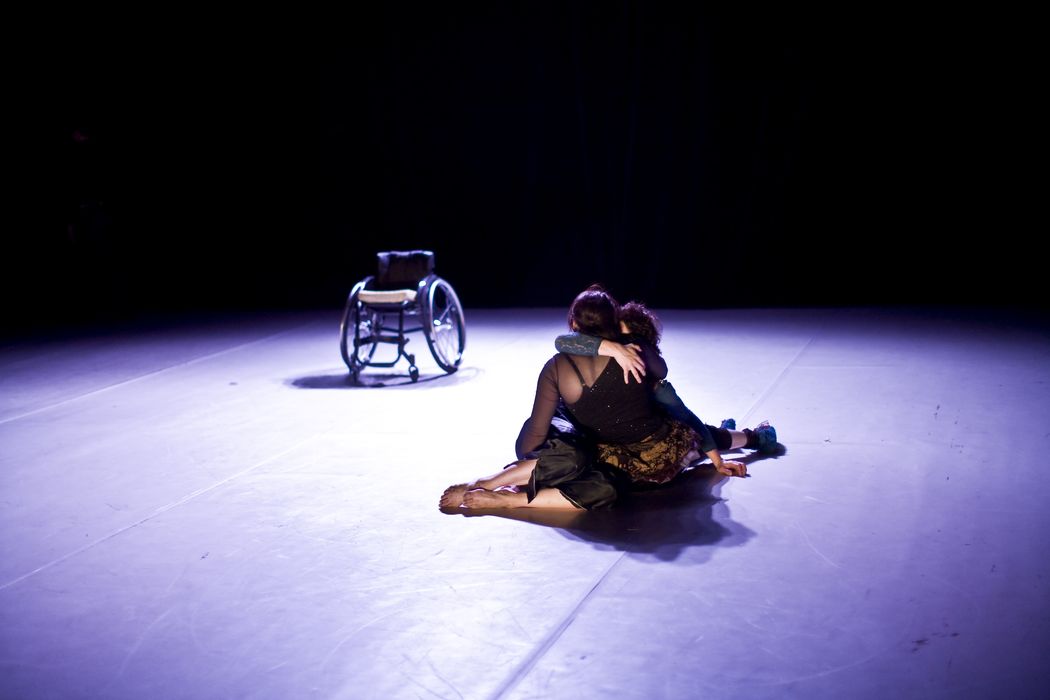